The Girl has chosen Health Occupations as her concentration for technical high school. That means she will graduate from high school as a Certified Nursing Assistant & can start working or go on to further her education in healthcare. (Take that, regular high schools!)

As she finishes up her freshman year, they’re learning the basics of being a CNA…. taking a pulse, checking for respiratory distress, & the all important making a bed. Hey… someone’s gotta do it.

She got a 95% on her bed making evaluation.

I guess she saves the other 5% for home. 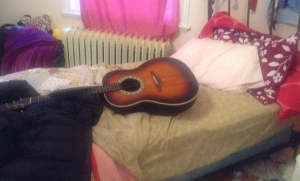 “Are you feeling okay?”

“What’s next… you’re going to tell us we’re adopted, aren’t you.”

“Not possible. I have Dad’s nose.”

It’s Mother’s Day. And this year, I kind of wanted to skip it. It’s been a combination of things lately. A new position at work has my brain on overload as I try to learn the ins & outs of the Insurance industry. (Honestly, if you’d told me five years ago that I would find insurance fascinating, I would have laughed at you.) My mom, The Joan, just got back from a week in Arizona visiting my sister, KK, which left me kind of jealous. And frankly, with KK out in Arizona, I miss the old Mother’s Days where The Joan, KK & I would find the most outrageous cards & exchange them around my dining room table while the men folk tried to find something else to do. (There was a flood one year & I think the guys were thrilled to have an excuse to hang out in the basement pumping water.)

I appreciate every kind gesture this year, from the cookout, to the flowers & the gift basket of bath stuff. (BATH STUFF! Seriously a favorite. I haven’t found a body scrub I don’t love.) It’s all beautiful & it’s all amazing.

But I think what’s getting to me most this year is that…..

I made the mistake of scanning Facebook today. I even tried to find some great pictures of me & The Kids & The Joan to post like everyone else. And I started reading everyone’s posts about their families making them dinner & their handpicked bouquets & their Pinterest-inspired wreath made by their children from discarded Legos & toilet paper tubes. I looked at my children, nestled deep into their electronics in their favorite chairs. And I looked around at my house… it’s a beautiful house… but it’s not a house owned by a person who values housekeeping as a skill set. And I felt like a fraud. Like this idea of “Motherhood” is so overwrought that I will never get it right.

15 years ago, I was handed a bundle of baby girl. There were no instructions. There were only well-meaning people telling me what they thought I should do whether they be friends, family or doctors. So I did it. I fed her. I played with her. I cleaned her after she spit up for the 1,000th time that day. And all the while I felt like somehow, some way, I was supposed to make this bundle into a functional human being. Three years later, I was handed a bundle of baby boy. And if you think you know what to do after having one, God gives you a completely different child & everything that worked with the first one doesn’t remotely work with the second.

I guess my point is…

I’ve been making this shit up as I go along.

And nothing makes you feel like more of a fraud than to realize that you’ve been just making it up as you go along.

But… and there’s always a but… as The Kids get older, things change. Some for the worse. There’s a lot of teenage attitude. Both of mine have perfected the eye-roll. And we’ve learned some “salty” language as The Girl would call it. (“Seriously, mom. I’m in public school now.”)

But a lot of it’s for the better. Their world views are changing & they’re learning to express themselves & their opinions. And I’m trying to respect that & give them the space to be who they are. And I like to think that making it up as I go along gives me the opportunity to give them that space. The Girl recently had to pick her “shop” for the remainder of her high school career. She goes to a technical high school where they graduate with a degree that can either go on to college or can start a career in their chosen trade. “Are you going to tell me what shop I have to pick?” she asked. “What?! No!” I replied… realizing that there was probably a time in her life where I would have tried to do exactly that.

As I’ve always told The Kids, my job as a mom it to teach them how to live on their own. If I do everything for them, where does that leave them when they venture out? (Except for folding fitted sheets. Screw that. They’re on their own to learn that.) And then I panic. Maybe I haven’t taught them enough. Maybe I’ve been too lax. Should they be cooking dinner on their own now? I have no idea & that’s what gives me the sneaking suspicion that I’m doing it all wrong.

And then I saw this thing going around on social media – the Motherhood Dare. Women are nominated to post a picture that makes them happy or proud to be a mom.

Well I have video. And I like to think that these videos prove that making it up as I go is actually working & gives me the sneaking suspicion that I’m getting something right. These videos show two kids whose eye-rolling & salty language are overshadowed by the ability to persevere.

This is The Girl swimming a 100 freestyle race in her District Championships. And while she didn’t make it to the next round, she worked really hard this year on her sport & that makes me proud.

And this is The Boy. He started on drums 8 months ago & was asked to join a band as part of his music school. This is him rocking the drum kit to No Doubt’s “Spiderwebs”. He’s had eight weeks to learn 10 songs before their first public performance. And he’s crushing it. And that makes me proud.

Maybe… just maybe… this making it up as I go along thing IS actually working.